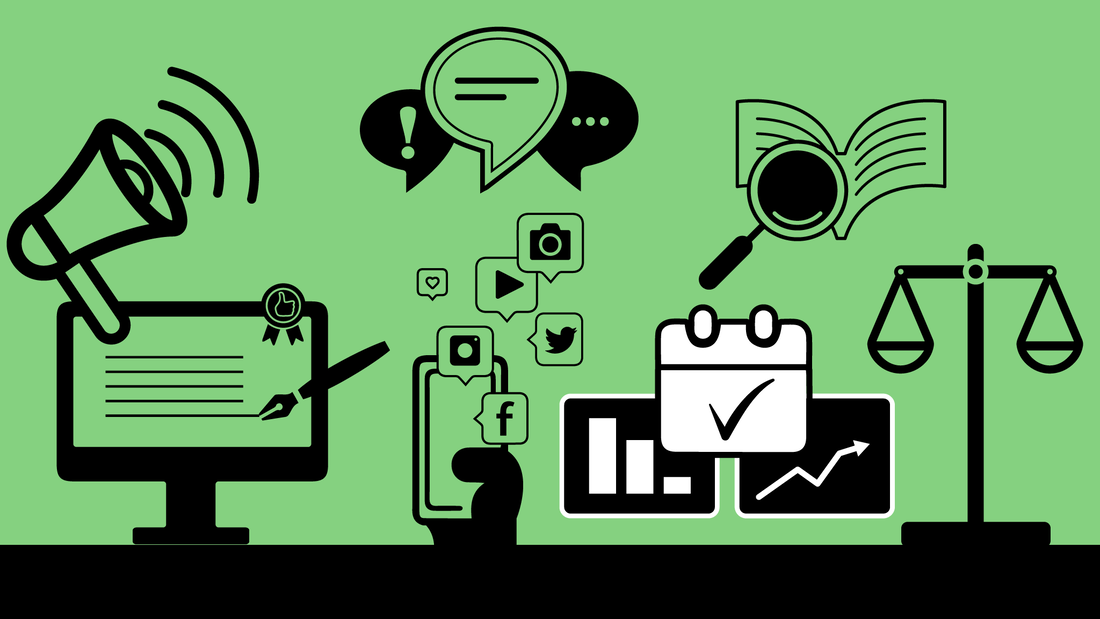 Social media statistics can be seen as feedback on the work you have done. Feedback that it is important for you to analyse and learn from. This can be done in a number of different ways.

Set targets, then measure and analyse them. But be sure to do this at several levels if you want to benefit from the results. Don’t measure for measurement’s sake, but ensure that you know from the outset what you want to use the figures for and focus on the benefit for your journalism.

Overall targets
Overall targets help to point out the direction of the newsroom’s/department’s work in the longer term. Examples are:
Targets and objectives
Overall quantitative targets should be combined with qualitative objectives, in order to find out if the audience is not just superficially following the newsroom’s/department’s work but also seriously engaging with its journalism: reading, viewing, clicking on links and listening to features.

Some suggestions on what to measure:
Also remember to differentiate between activity targets ("we will post something x times per week”, or “we will have x number of social media investigations during the year”) and impact targets (“we will increase the number of interactions by 100 per cent during the year”). Activity targets are often easy to achieve, but are a much blunter instrument than impact targets if the newsroom’s/department’s aim is to develop their social media journalism based on analysis of the statistics.

For those aiming to sell a product, it is easy to work out what success is on social media: the product gets attention and sells well as a result. For a public service broadcaster newsroom/department tasked with being where the audience is, it can be more difficult and more complex to determine which figures make us successful.

​When you set targets, the most important thing to do is your own analysis of what you want to get out of the newsroom’s/department’s presence on social media and to not concern yourself too much with what others are doing, and not end up talking in general terms about posts going viral. The main objective of a newsroom/department that invests heavily in explainers in video format may be that as many users as possible view the videos and as much as possible of the videos; while a newsroom/department invested in capturing the hot topics of the days on radio and on the internet would be better off focusing on the content of comment fields attached to their own accounts.
Some examples of simple objectives:

The average (mean value) is a good figure for the newsroom/department to talk about at weekly meetings, for example. It provides a concrete, easy to understand picture of the trend over time for an account on social media. The average (for reach, comments or shares) is also an interesting figure to compare with the averages for other similar pages.
To use Facebook Insights on a PC to find out the averages for comments and shares: 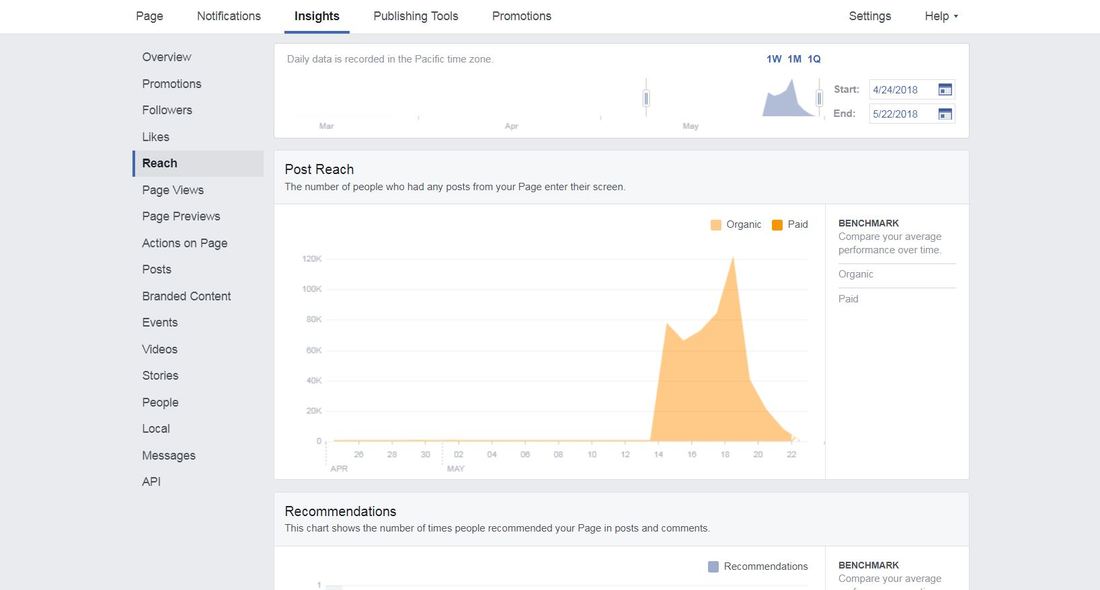 Facebook Insights also includes the Benchmark feature (list to the right), allowing you to compare averages over time, and this is where you choose the category you want to measure. In the example below, the graph shows the average number of reactions, comments and shares, etc. for the period (24 April to 22 May), as well as the average for the previous period: 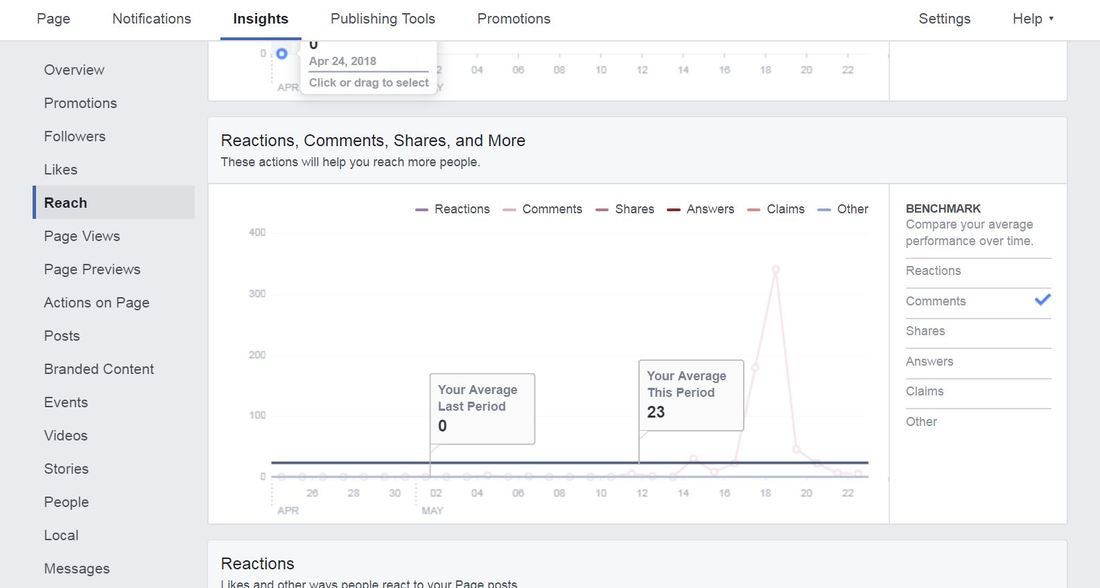 What makes a comments field successful depends less on the quantity and more on the quality of the comments, and whether you can create new journalism from them. A comments field with curious, engaged and intelligent/educated comments is generally worth more, from a journalistic perspective, than one with 200 wows, hearts and likes.

Keeping track of the average number of comments over time is a good idea, but to measure the qualitative success of comments fields you need to add a target like this: ten comments per month should lead to a follow-up or new news item.

When the audience shares your posts with their friends, this is generally a solid measurement of success. However, we know that many people also share what they haven’t read, viewed or listened to, and if your newsroom/department produces a video for example, you should supplement the sharing statistics with how many people have viewed your videos and whether they had the sound turned on.

Audience likes can be somewhat more difficult to interpret (a little clearer on Facebook, with its palette of emoticons). A straight-out like often means that someone likes what you do, but does not necessarily mean that they have read your journalism.

Unlike comments and shares, which in the best case measure journalistic value, many likes trigger the platform’s algorithms to show the post to more users. Furthermore, a high number of likes has a morale-building value that should not be underestimated – the newsroom/department will be encouraged by many likes, on a Facebook page and on individual posts.

Statistics of reactions (likes, shares, comments) can be used to advantage to identify patterns in what your audience respond to. Compare posts with a high number per reaction type and look for the common denominator. Was it a crisp close-up shot loaded with emotion? Or was it an enticing question in the post that led to insightful, content-rich comments?

THE GRAPH POINTS UPWARDS. WHAT DOES THIS MEAN?

You come in to work and find that your newsroom’s Facebook post from yesterday has gone viral, and is the most shared post ever. Wow! But it is not enough merely to note that the figures look good. (Note that the figure in the picture above does not specify the number of shares, but the total number of reactions, which includes likes, comments and shares. A common misconception is to interpret the figure above as shares only).

You need to know more about why so many users shared the post and find out what contexts your journalism ends up in as well as what has been written about you and your content. In addition to the audience simply loving your post, there are other possible scenarios such as:

These situations should be handled in different ways, and so you need to know why so many people shared the post, and what they have written about your newsroom/department and about the post. Identify the posts that ‘fly’ (get shared and commented on the most) and respond as quickly as possible in comments fields so that others will be able to see your replies.

The easiest way of searching to find out which Facebook pages your content has been shared on is:
​